Transport produces 7 gigatons of carbon dioxide-equivalent greenhouse gas emissions annually, or 23 percent of energy-related emissions, which is around 14 percent of all emissions. In individual countries, transport can account for much higher shares, even 35 percent of all emissions. Growth rates in emissions for some subsectors like air transport and international shipping are very high, so the Transport Sector requires special focus to keep emissions from ballooning out of control, as some projections indicate. Transport, however, is a service derived from economic growth. We find that wealthier people travel more, locally and internationally, and demand more goods and services. So, as a country develops economically, movement of people and goods increases.

In terms of greenhouse gas emissions reduction, transport is constrained in some subsectors where few economically viable alternative fuels exist. Some transport, therefore, can only currently be made more efficient at using existing fossil fuels; others, however, do have alternative fuels, such as electricity for cars instead of gasoline. Other modes of transport can be avoided completely using information and communication technologies. Project Drawdown has examined 11 of these transport solutions.

Airplanes – increased use of technologies to reduce aircraft fuel burn

Cars – increased use of hybrid cars

Electric vehicles – increased use of battery and plug-in hybrid vehicles

Trucks – increased use of fuel reduction technologies and approaches for trucking

Each solution in the Transport Sector was modeled individually, and then integration was performed to ensure consistency across the sector and with the other sectors. Information gathered and data collected are used to develop solution-specific models that evaluate the potential financial and emission-reduction impacts of each solution when adopted globally from 2020 to 2050. Models compare a Reference Scenario that assumes current adoption remains at a constant percent of the current total land area, with high adoption scenarios assuming a reasonably vigorous global adoption path. In doing so, the results reflect the full impact of the solution, i.e. the total 30-year impact of adoption when scaled beyond the solution’s current status.

Figure 1: Clustering of and Interactions Between Project Drawdown’s 11 Transport Solutions 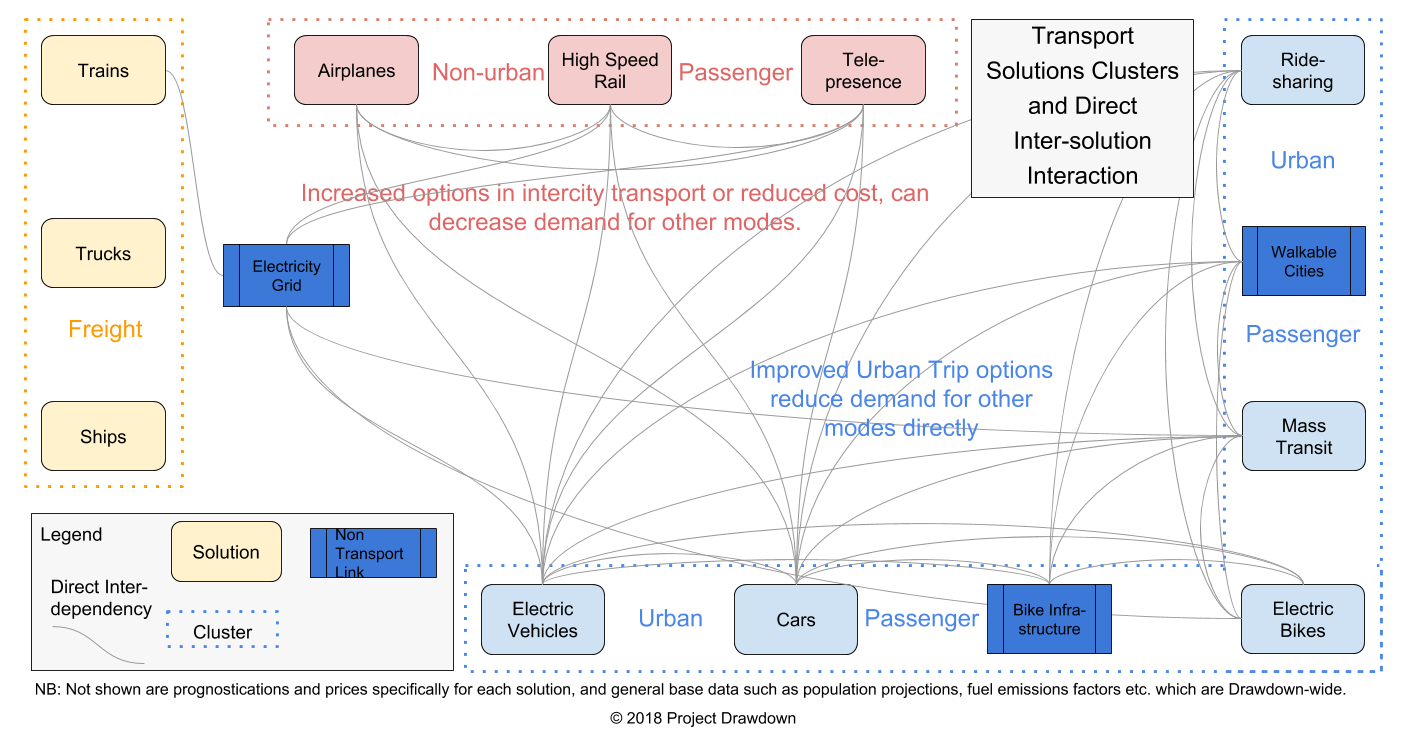 The groupings shown in Figure 1 indicate the proximity of the constituent solutions to each other, and how the total addressable markets for the Transport Sector are shared. Each market was defined at the cluster level using several sources, including the International Energy Agency (IEA), the International Council for Clean Transportation (ICCT), the Institute for Transportation and Development Policy (ITDP), and the University of California at Davis (UCD). All urban passenger transport solutions, for instance, share the urban transport market; thus, the adoption of each is related to the adoption of others. Note that ship-borne freight is less substitutable by land modes; hence, we consider the land modes independent of maritime freight, and we do not consider air freight. We do, however, consider the use of electric vehicles and hybrids in the urban and non-urban realms by ensuring market and adoption consistency. Integration is discussed in greater detail below.

The Transport Sector solutions clusters are described below:

To ensure bounding of projected adoptions by total market projections, we prioritized the modes of transport by their energy use, space efficiency, and potential impact on energy use within each cluster. The adoption of high-priority solutions was not reduced, but that of other solutions was reduced, particularly in the Drawdown and Optimum Scenarios. The prioritized order of solutions is:

This prioritization does not imply that we see higher-ranked solutions as being adopted globally before others, but that adoption of those solutions should be promoted to the maximum extent prior to lower ones in order to maximize the impact of the sector. It also implies that the emissions impact of lower solutions could be greater if they were of a higher priority (and those of higher solutions could have lower impact if deprioritized). We do acknowledge that mode choice analysis, for estimating actual demand for a solution is a complex activity that is not possible at the global level, especially not to 2050. Our simplified approach therefore attempts to illustrate how, with the adoption of each solution in a particular scenario, the greatest emissions and other benefits could be attained.

The adoption of electric vehicles (EVs) and efficient cars (hybrids) was adjusted to prevent exceeding the total addressable market. We have classified them as urban modes of transport, but have also ensured consistency with the non-urban passenger market. This was dependent on the split in car usage between urban and non-urban travel. We assumed that hybrid cars have a 50:50 split in usage in the urban and non-urban realms, and that the split remains constant throughout the analysis period (except in the Optimum Scenario, where the urban share declines 5 percent per year to 0 percent after 2030). For EVs, we assume that “range anxiety”[1] limits non-urban travel to 0 percent until 2020, when battery capacity technology develops enough to encourage EV users to drive outside of cities. After 2020, the non-urban share of EV travel rises by 5 percent per year until it levels off at 45 percent of all EV travel (except for the Optimum Scenario, where it levels off at 75 percent of all EV travel.) Note that the Optimum Scenario involves increased use of more environmentally-sound modes like biking and walking in urban areas, and the use of less space-efficient modes (EVs and hybrids) mainly outside of cities.

[1] Range anxiety is the fear of not having sufficient battery power or charging stations to complete a long trip by electric vehicle. This would be akin to the early days of gasoline-powered car use, when gas stations were much more rare and long-distance trips were harder.

All 11 Transport solutions show a potential of 45.8 gigatons of carbon dioxide-equivalent greenhouse gas reductions over 2020-2050 in the Plausible Scenario, or an average of 1.5 gigatons per year. This is below most of the other sectors analyzed by Project Drawdown. Figure 2 compares the results for each sector.

Figure 2: Mitigation Impact by Sector, 2020-2050 (in Gigatons of Carbon Dioxide-Equivalent) 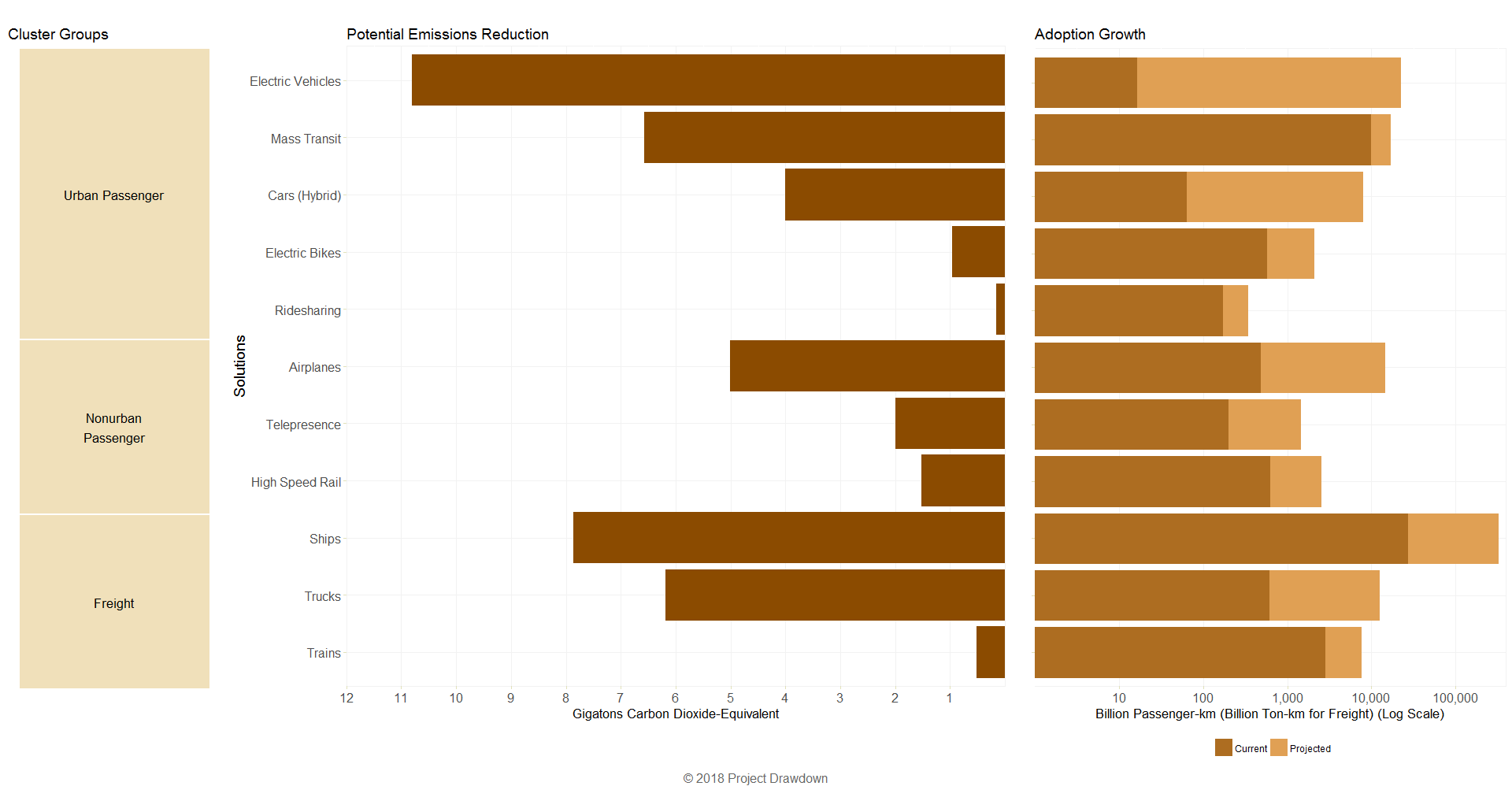 Figure 4: Mitigation Impacts by Solution (in Gigatons of Carbon Dioxide-Equivalent), 2020-2050

The key financial results of the Plausible Scenario show US$22.7 trillion in operating savings over the study period for the entire sector, but at a marginal investment cost of US$17.8 trillion.[1] The detailed financial results for each solution are shown in Table 2.

To compare Project Drawdown’s results to those of other major organizations, the team embarked on a benchmarking exercise using mainly data from the International Transport Forum (ITF) and the International Energy Agency (IEA) (both parts of the Organisation for Economic Cooperation and Development, OECD).

Overall, Project Drawdown's Drawdown Scenario is in line with the ITF's 2017 models, though some points of difference are noted:

The Project Drawdown analysis for the Transport Sector also shows results similar to the IEA's results for a shift from the 6°C to the 2°C Scenario. There are a few points to note, however:

The overall need to reduce the emissions impact of transport is clear, and the potential for reducing its emissions is shown in the scenarios developed by Project Drawdown. These scenarios were developed by a research team of 14 transportation and mobility researchers throughout the world, and draws on hundreds of scientifically supported sources. The scenarios show significant reductions in transportation emissions over 2020-2050, which are found to be aligned with publications by other international bodies such as the IEA and the ITF.

The global nature of this work comes with strong restrictions on modeling to 2050. The data available at the global level was generally relevant for a few dominant economies like the European Union, the USA, and China. This could have skewed our results, except in a few cases where the sector is global in nature (such as airplanes and ships) or is heavily concentrated in those economies (such as high-speed rail). Additionally, we did not create a global mode-choice model to estimate the uptake of each solution over time, again due to very limited data availability. Our integration effort was extensive, but still some connections between different solutions could not be realistically represented. Finally, not all currently developing solutions were included in the set of Project Drawdown Transport solutions, and some that other bodies have included in their models, such as biofuels, could lead to projections of an increased impact of the transport sector relevant to Project Drawdown. Still, the work of Project Drawdown shows that high adoption of solutions for reducing transport emissions is critical for getting the world towards drawdown.

We’re addicted to fossil fuels for transport; why not let the energy production and land sectors deal with reducing emissions?

For now, we are heavily dependent on fossil fuels: the Intergovernmental Panel on Climate Change (IPCC) estimates that humanity uses oil for 94 percent of its transport needs, and electricity for 1 percent. However, there is much potential for this to change. Some of the technologies presented by Project Drawdown electrify transport so that that 1% may grow, some avoid using direct energy completely by using human power (walking and biking), and some reduce the use of oil by making vehicles more efficient. Together, they help transport contribute to drawdown; without these changes, it is much less likely that any of the global climate change targets will be met.

These technological solutions are all well and good, but behavior change can make the largest impact. Have you looked into changing how people decide to move around rather than what options they have?

Behavioral change is a part of several solutions, but note that choosing more efficient modes of transport over others is a behavior change in itself. Nevertheless, in the Drawdown and Optimum Scenarios, we examine the potential of people driving with more people in the car to reduce wasted space. This impact is significant, and can be achieved as ride-sharing acceptance increases. Separately, we modeled carpooling to work in North America as a solution. In a sense, though, the entire work of Project Drawdown aims to promote behavior change at all levels: individuals, businesses, land and building owners, utilities, cities, and governments.

I can think of many other technologies that should have been solutions, like car-sharing or maglev. Why weren’t they included?

The criteria for inclusion in Drawdown outline that, among other things, a Drawdown solution must be scaling and data for it must exist. We evaluated several options and decided which to focus on based on these criteria, and also based on a literature review which included estimates of the potential for emissions reduction. We acknowledge that other solutions can be added to the list, so future work at Project Drawdown may examine additional solutions.

When we electrify all these modes of transport, we’re just shifting emissions to the grid. Why bother?

The answer is dependent on place. The grid in some countries is based so heavily on coal that driving an electric car might release more emissions than driving an efficient car. Other countries, like Paraguay, have an almost 100 percent renewable grid, so switching to electric would result in a large reduction in emissions per trip. The general trend is for electricity grids to get cleaner, so from the practical perspective electrifying transport in many leading nations can be beneficial immediately, and electrifying in the others can be beneficial in the future. The Project Drawdown models did not go to this level of detail, but in the future this could be more important for country-level analysis.

The following Coming Attractions are associated with the Transport sector:

Browse All Solutions
Back to top