Advancing key areas of gender equity can reduce emissions—that is what defines the Women and Girls Sector. Access to education and voluntary family planning are basic human rights and should be secured simply because they are, yet significant gaps remain around the world today. They are included as solutions in Project Drawdown because advancing those rights has an effect on fertility rates and population growth. Population size is a key driver of demand for food, transportation, electricity, buildings, goods, etc., all with attendant emissions. Women smallholder farmers face disparity in rights, resources, and training compared with their male counterparts. Addressing inequity in agriculture is a solution in Project Drawdown due to its effect on improving farm yields and thus reducing deforestation for additional agricultural land. As a group, Educating Girls, Family Planning, and Women Smallholders form the Women and Girls Sector—an area often overlooked but key to reaching drawdown.

Family Planning – scaling-up voluntary family planning efforts, including access to contraception and reproductive health resources, especially in countries where the unmet need for contraception is high or current demand is low, leading to the decline in total fertility rates.

Family Planning and Educating Girls were modeled together as a population change solution with results allocated to each solution equally. Women Smallholders was modeled using the Drawdown Land Use Model. Then, results of the three solutions were integrated to ensure consistency across the Women and Girls sector and with the other sectors.

Information gathered and data collected are used to develop all Drawdown solution-specific models that evaluate the potential financial and emission-reduction impacts of each solution across different sectors when adopted globally from 2020-2050. Each solution-specific model has a population change module comparing a Reference 1 Scenario that assumes the UN High Population variant with no additional investment in family planning resources or addressing the gender gap in primary/secondary education, and a Reference 2 Scenario that assumes the UN Medium Population variant with vigorous global adoption of both measures.

The UN population projections rely on use of three key inputs to determine the shifts in population: fertility, mortality, and international migration (World Population Prospects, 2010). This analysis assumes that the principal mechanism for population change between the High and Medium variants results from advancing family planning and education in regions with limited access currently.

Across every solution-specific model, the population change module determines total functional demand of conventional technologies/practices for both Reference 1 and Reference 2 Scenarios. The difference between them represents the potential increase in market demand resulting from higher global population. It is assumed that market demand equals supply. 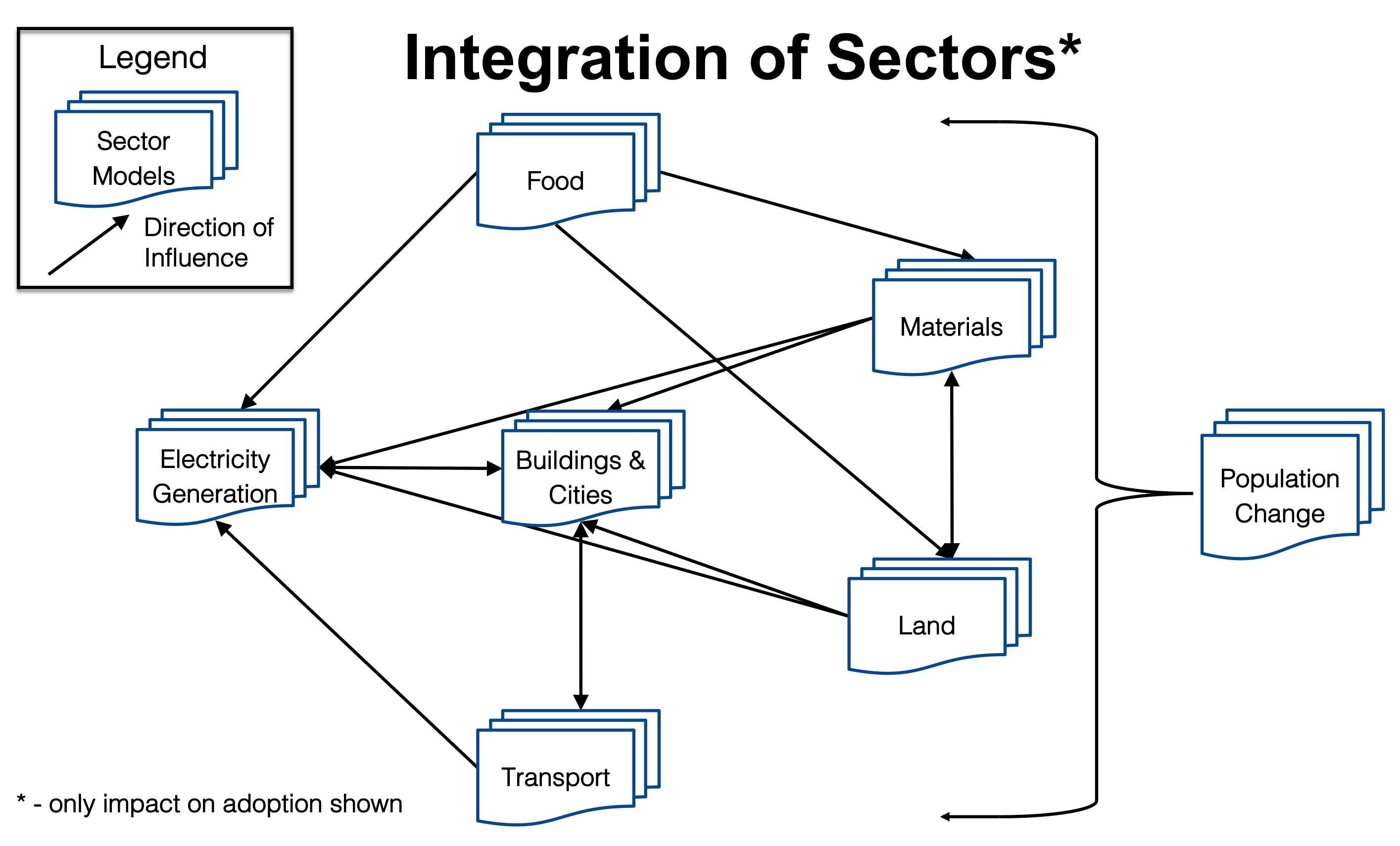 The total functional demand globally of goods and services represents the Total Addressable Market (TAM), which is composed of all technologies/practices (including the conventional mix and all possible solutions) that provide the same function within a given sector. For example, the TAM (or demand) for the electricity generation market consists of coal- and gas-fired plants, plus solar, wind, geothermal, biomass, nuclear, etc. Lighting demand is a function of the global market for petalumen-hours of lighting supplied by multiple technologies, including incandescent, halogen, HID, LFL, CFL, and LED lighting.

Food demand is determined by the supply and consumption of over eighty different commodities. Estimated changes to the TAM are a function of population, economic conditions, policies and regulations, primary energy prices, infrastructural capacity, technologies costs, and a host of other variables that impact individual and group preferences, such as culture, location, media, etc. Because many factors are difficult to model due to high variability across time and populations, population growth and economic conditions are the only factors assumed to directly impact the size of the TAM in the Project Drawdown analysis.

Individual adoption scenarios for Family Planning or Educating Girls were not developed due to a lack of existing prognostications from external sources. In addition, the high variability between different population change measures in terms of location, implementation, and scale prevent accurate estimations of adoption required for this analysis. Instead, it assumes that the incremental change in population between the high and medium population variants represents the vigorous adoption of voluntary family planning, supported by universal education through the uptake of girls education.

Project Drawdown’s approach seeks to model integration between and within sectors in order to avoid double counting. Results from the population change modules for each solution-specific model were aggregated into a Population Change Integration Model. The emissions reductions resulting from the Women Smallholders were added to the results of the population change solutions to determine the total impact of the Women and Girls Sector.

The impact of population change on market demand is attributed principally to voluntary family planning measures. However, it is recognized that universal education results in increased uptake of family planning. There remains a substantial gender gap in primary and secondary education with 130 million girls worldwide being denied equal quality and access to schooling.

Because the effect of addressing gender inequality in education is inextricably intertwined with family planning and the precise mechanisms for this interaction are unknown, the total population change results are divided equally between family planning and educating girls.

In Project Drawdown’s Plausible Scenario, Women and Girls Sector solutions are responsible for 9.99 percent of total emissions mitigation impact. In the Drawdown and Optimum Scenarios, they contribute 7.34 percent and 6.58 percent, respectively.

Figure 2: Mitigation Impact by Sector, 2020-2050 (in Gigatons of Carbon Dioxide-Equivalent)

*NOTE: Land usage and related emissions are determined by estimations of Total Land Area (TLA) based on hectares of land in different land types, agroecological zones, and thermal-moisture regimes derived from data provided by the Food and Agriculture Organization of the United Nations (FAO) and the International Institute for Applied Systems Analysis (FAO/IIASA, 2012). Due to the high level of uncertainty related to the higher population scenario, land availability, and resource constraints, emissions reductions related to the land use sector were not included in this analysis.

Figure 3: Mitigation Impact of Population Change Solutions by Impact on other Sectors, 2020-2050 (in Gigatons of Carbon Dioxide-Equivalent)

Financial impacts are not modeled for population change solutions, as costs are highly variable by country and type of intervention (e.g., reproductive health clinics, contraception, education, etc.). In addition, Drawdown models evaluate financial impacts based on the implementing level of agency (i.e. decision-making and action), however population change measures are not necessarily borne by a single definable agent.

Demographic change, including population growth, age distribution, extent of urbanization, and household size all affect consumption and production of energy, and therefore emissions. A number of simulation models have demonstrated that decreasing the rate of population growth could substantially reduce global carbon dioxide emissions. Using UN population projections from 2004 and the moderate Intergovernmental Panel on Climate Change (IPCC) B2 scenario, O’Neill et al (2014) estimate the difference between the UN High and Medium Population variants could result in an increase of 1.7 gigatons of carbon per year by 2050 (O’Neill et al, 2012). Applying the higher energy use IPCC A2 scenario, O’Neill et al estimate an increase to 2.5 gigatons of carbon per year by 2050. These estimates only account for combustion of fossil fuels for energy production, therefore excluding other types of emissions including refrigerants, and carbon dioxide from land use change.

The actual growth in annual emissions from this study is unknown, so the use of a linear trend may overestimate the results; however, the study explicitly does not estimate non-carbon dioxide emissions, such as methane, nitrous oxide, and fluorinated gases, which would significantly increase the total carbon dioxide-equivalent reduction.

Using this study as a benchmark, the results of the Drawdown population change solutions at 102.96 gigatons of carbon dioxide-equivalent are substantially lower than the estimated range using the IPCC B2 and A2 scenarios.

As the population grows, despite technological advancements and improved societal organization, additional resources are necessary to meet demand for energy, buildings, food, materials, etc. Reducing the momentum and scale of human population growth is one of many solutions directed at reducing human impact on the environment. The greatest means for slowing population growth, while upholding human rights, is through voluntary family planning and educating girls.

Reducing unintended births through scale-up of voluntary, high-quality family planning and of the enabling mechanism of universal education, will have a direct impact on reducing global emissions by reducing the number of people generating emissions.

Although there is a lack of consensus over the precise interactions between educational attainment, contraceptive use, and fertility outcomes, it is clear that these complementary solutions are important, yet often overlooked, contributors toward drawdown of atmospheric greenhouse gasses.

Browse All Solutions
Back to top